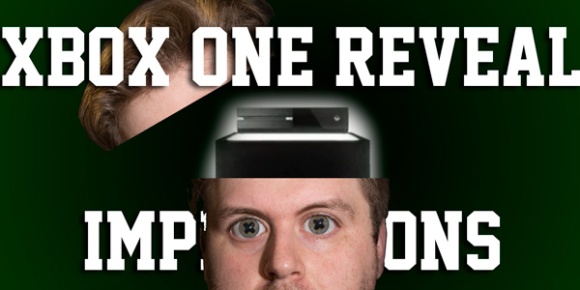 It’s 3am and the reveal of the new Xbox is beginning. Here we go!

They start off and they’re instantly describing it as an all in one home entertainment system.  I feel sad already.

We can turn on the Xbox One with voice control. It will “instantly” recognise you and remember your last position. The new dashboard looks much like the current design.

Time to start this video game console reveal with a in depth look at how we can watch TV on it!

Instant switching and snap mode are multitasking functions built into the Xbox. Switching between TV, Games and Applications and even displaying them simultaneously. It seems very practical. Not exciting but practical.

Skype is built in.  I wonder if we’ll need a subscription for group video chat.

The Kinect, new controller and Smart Glass are our “revolutionary” input devices.  They look fine.

Controller changes. Looks about the same. Feedback in the triggers. Wait what?! Say more about that!  The Kinect is apparently able to detect which controller you are holding also.  Twins are going to have the worst time with this console.

Access everything (profile, saves, games) anywhere and share game content via the cloud. They don’t go into details but it looks similar to the PS4’s sharing function where the console constantly records your game footage which you can then upload and share.

Time for games. It’s EA Sports! They sure know how to get to the hardcore gamers core. TV and then sports games? Be still my beating heart. And now they have American Sport Celebrities! STOP BEFORE I DIE OF EXCITEMENT! EA has a new engine for their sports games called Ignite. I expect it’s due to their usefulness as fire lighters.

Fifa 14 is an X-Box exclusive? Or just the Ultimate Team mode is? They’re kind of ambiguous on that note.

A bunch of the sports games get shown off.  The footage is likely in engine but none of it is gameplay.

Forza Motorsport 5.  It looks good. Again no gameplay but I have no doubt it’s in engine. It will be a launch title and we will see more at E3.

Remedy’s new game is Quantum Break. It’s both a game and a TV series?  The first scene is a live action scene with a little girl. It’s not very well made. Then a ship crashes into a bridge. I have no idea what the game is at all and again we’re not shown enough to tell.

More titles in development now than at any other point in xbox’s history 8 new franchises. 15 in house exclusives for the first year.

A women has been spotted! Mark your bingo cards everyone. She’s here to talk about social features and community because that’s what the industry says women are good at right?  I’m not sure she actually said anything other than acting as a lead in for a Halo announcement.

Another woman! Maybe Microsoft isn’t as predictable as we all thought.

A live action Halo television series with Steven Spielberg is now a thing that is happening.

The release date is… “Later this year”.  That’s not a date Microsoft!

They’re going to show us games. At E3.

Call of Duty: Ghosts. New Engine. You get a dog. They’ve pulled the director of Syriana (Stephen Gaghan) on board to make it double emotion.

In summation: It’s a black box for tv, sports and call of duty.  I think we’re done. I’m going back to bed.

One thought on “Xbox One Reveal Impressions”