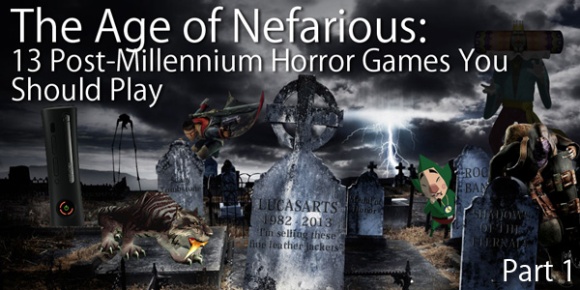 The video game medium has evolved and advanced at great speed over the past few decades – playing something like Dark Souls, The Last of Us, or Grand Theft Auto 5 would have been the stuff of a madman’s dreams just twenty years ago.

The advancement of not only technology but also creative visions as to what can be achieved with the medium has affected all genres, horror included. We’ve come a hell of a long way since the days of Friday the 13th on the Commodore 64 and Ghost House on the Sega Master System, with developers becoming able to create horror games that can genuinely unsettle, disturb, frighten, or simply effectively jump-scare the player via the use of intelligent writing, clever game design and gameplay mechanics, and the increased immersion that can come with improved visuals and audio.

END_OF_DOCUMENT_TOKEN_TO_BE_REPLACED

Episode 56 – Kickstart this! …and that and all of these ones

James gets his Fire Emblem on, Paul plays The Swapper and Ben needs to talk more.  There is the amazing Crypt of the NecroDancer to chat about, PS4 remote play, American McGee’s new projects and more crowd funding than you can point a stick at!  That is of course assuming you can’t point at more than 10 things with a stick.  This included a new project from Double Fine, a successor to The Neverhood and a gorgeous trip back to the 1930’s.

Listen to us talk.

Grab the episode here or subscribe to us on iTunes.

Show notes after the jump.